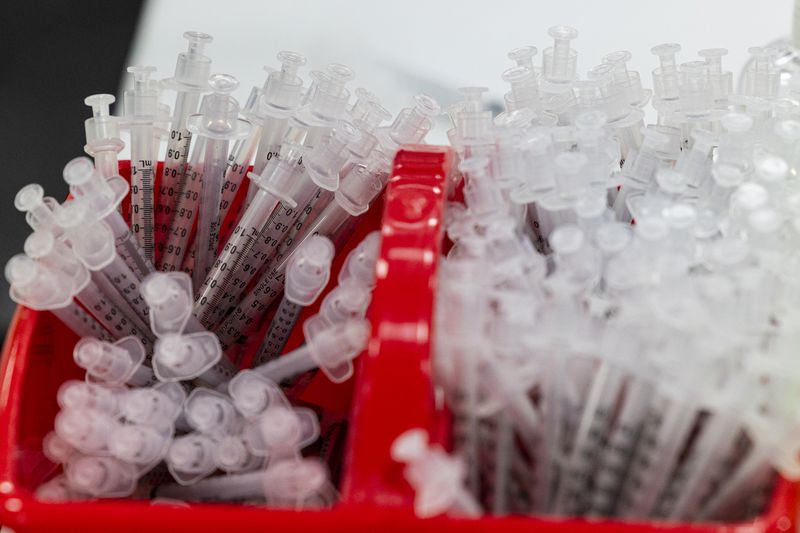 Empty syringes wait to be filled with the Pfizer-BioNTech COVID-19 vaccine at the Kalamazoo Expo Center (Joel Bissell | MLive.com)

Vaccines to protect against severe illness and death from COVID-19 started as the key to a return to normal, but they could wind up unlocking much more for the future of health care.

The mRNA vaccine technology used by Pfizer/BioNTech and Moderna for their respective coronavirus vaccines has been heavily touted by doctors and public health officials as a modern miracle of science and a means to revolutionize vaccine development.

“It’s hard to overestimate the impact this will have on human health,” said Nils Walter, a professor of biological chemistry at the University of Michigan who has studied mRNA for about 30 years. “It’s like introducing the iPhone when everyone had a flip phone.”

Beyond its uses for COVID-19, numerous mRNA vaccine candidates are being researched and undergoing clinical trials for the treatment of cancer, including pancreatic cancer, colorectal cancer and melanoma, as well as HIV, influenza, Ebola, Zika, and rabies.

“The same molecule from billions of years ago that gave us life is now coming back to what ails us today in life, which are viral infections and the terrible diseases like cancer,” Walter said. “It’s transformative.”

Vaccines using mRNA technology work by delivering instructions to the cells. In the case of COVID-19, those instructions are to create a protein that mimics the spike protein found in SARS-CoV-2, which triggers an immune response and the development of antibodies to defend against that virus.

The ingredients of the vaccine are broken down and discarded in a matter of days. The mRNA never enters the nucleus of the cell, and has no interaction with the cell’s DNA, health officials have repeatedly stated.

“This is just the beginning; we’re just scratching the surface here,” he said. “mRNA vaccine technology for treating diseases isn’t going anywhere. If anything, it’s going to get better and better and be used more widespread.”

Previous vaccines like the annual flu shot could take a year to develop, which made it challenging to predict which strains would be around by the next flu cycle. As a result, flu shot effectiveness has varied year to year.

With mRNA vaccines, that timeline can be cutdown 10-fold, Walter said.

“We can now operate at the same speed as the virus and therefore, viruses can no longer outmaneuver us and the vaccine can be made to specs in very, very short time,” he said. “It’s a totally different ball game.”

Research into mRNA technology for vaccines goes back decades, though the efforts improved within the last 10 years. During the coronavirus pandemic, increased funding and the massive patient streams allowed for large-scale trials and put the ongoing research to the test.

As a result, Pfizer and Moderna introduced their respective vaccines, which proved effective at protecting against severe illness from COVID-19. In February, unvaccinated Michiganders were 16 times more likely to die from COVID-19 than vaccinated individuals, according to data from the Michigan Department of Health and Human Services.

In Michigan, more than 6.8 million primary doses of Pfizer’s shot and more than 4.2 million of Moderna’s vaccine have been administered. Another 3.1 million booster doses of the two mRNA vaccines have gone into arms in recent months.

Given the effectiveness of the first large-scale mRNA vaccines, Walter said he has no doubt that the technology will prove applicable to numerous other disease in the future.

“You’ll have to design different things and try different things and not everything will work as beautifully as it did against coronavirus,” he said. “But I think there’s going to be solutions for most viruses and other disease that have to do with activating the immune response to do something against the disease.”

In January, Moderna announced the beginning of a clinical trial for its experimental HIV vaccine. By delivering mRNA, researchers hope to “induce B-cell response to guide their early maturation toward broadly neutralizing antibody development.”

Phase I trials for the drug are underway and will evaluate the safety and effectiveness of the shot in 56 HIV-negative adult volunteers, who will be monitored six months after receiving the drug. Among the individuals, some will receive one dose; some will receive two, and some will receive a booster after the primary dosage.

Researchers have also been testing mRNA-based cancer treatment vaccines in small trials for nearly a decade with promising early results, according to the National Cancer Institute.

The idea is to develop an mRNA vaccine that re-trains the immune system to detect and attack the cancerous cells that have camouflaged themselves and developed into tumors. By doing so, researchers theorize that they can treat cancer.

“Every pharma company now is investing billions of dollars into developing these mRNA vaccines into the anti-cancer medicine,” Walter said.

While no mRNA vaccine for cancer has gained approval from the U.S. Food and Drug Administration, there’s hope that the success of COVID-19 vaccines will help accelerate clinical research.