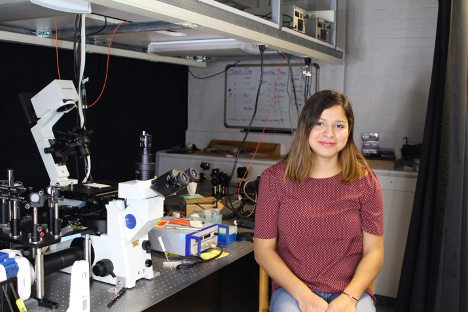 Karen Montoya is a fourth year Ph.D. candidate in Nils Walter’s lab (Department of Chemistry, College of LSA) where she is studying state-of-the-art single molecule spectroscopy and imaging.

Montoya’s interests in biosciences were sparked in part by “Osmosis Jones,” an animated action comedy about one white blood cell’s race against the biological clock to hunt down and destroy a lethal new virus. With a plot of an uncanny relevance to today’s pandemic, this 2001 movie made a strong impression on the young Montoya. The movie’s take on physiology inspired her to want to dive into the world of a cell through microscopy studies.

This curiosity in biological sciences further developed when, in high school, she joined a competitive Math, Science and Technology Magnet Program. There, she received the support of her math teacher, Ms. Richter, a woman in STEM who became an important role model for her. Through this program, she developed the strong foundation in math and science that launched her career in STEM.

Montoya did her undergraduate studies at the University of California San Diego (UCSD). She benefited from a program designed to support and increase diversity in science by partnering faculty with students. She explains that in joining this program, the faculty send a clear message that they are happy to help. This reduces the hierarchical barriers and the anxiety that students might experience when they reach out to faculty.

When it was time to decide for a graduate school, Montoya applied to the University of Michigan given its reputation in chemistry. The location and fellowship support were also deciding factors on her decision. Ms. Montoya wanted to move away from California and experience four seasons –“spring in particular!” and a different place altogether. The University of Michigan also offered her a Rackham Merit Fellowship (RMF). According to the RMF website, “this program helps sustain the academic excellence and inclusiveness of the Michigan graduate community, one that embraces students with diverse experiences and goals, and who come from many educational, cultural, geographic, and familial backgrounds.”

Upon arriving to Michigan, she joined the Nils Walter lab where she became part of a community of 30 scientists (postdocs and graduate students). After her first year, she became one of four recipients of a highly competitive Federal Training Grant that gave her access to rigorous topical courses, networking with students, and mentorship opportunities from faculty. All along, Ms. Montoya has participated in the Center for RNA Biomedicine seminars where she has met new colleagues and learned about the latest RNA research.

Part of her Training Grant, Montoya is currently doing an internship in a local biotech company, where she is working on the development of a platform to detect and quantify single molecules. She expects that this experience will be useful when, upon finishing her Ph.D. in a year and a half, she will be looking for a position in the industry.

Ms. Montoya is also interested in teaching along her career path. As a Latina and woman in STEM, Montoya feels very strongly about inclusion and retention of underrepresented groups in higher education. As an undergraduate, she worked in a Math & Science Tutorial Program that focused on those aspects, and she observed many “eureka moments” while she tutored other students. Reflecting on this experience, if she were to lecture, she would strive to create such a supportive environment with many opportunities for students.

Outside of science, Karen has been caring for “Buddies,” her newly adopted adorable puppy! Every weekend they make a point to explore a new park in Michigan.