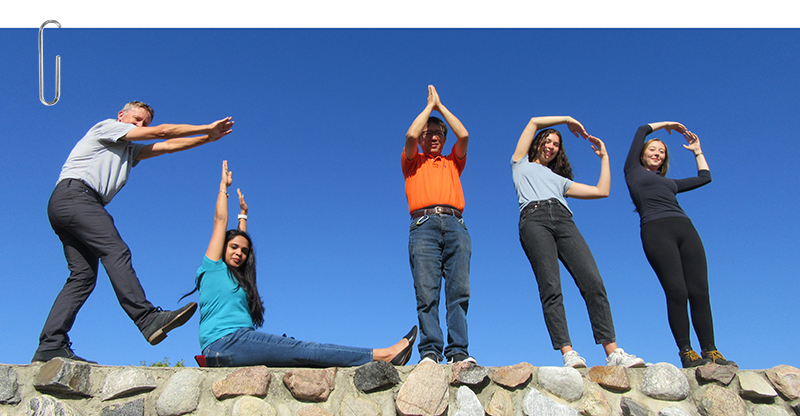 While most efforts involving CRISPR are focused on genome editing, the CRISPR machinery could also be used as a molecular weapon to slice up chromosomes of cancer cells. Research has shown that chromosomes may undergo a “catastrophic” event early in the process of carcinogenesis causing multiple breakages. While many cells die in such events, some of them repair the damaged chromosomes in ways that give them the power to multiply faster and to form tumors. Such chromosome rearrangements bring into close proximity pieces of chromosomes that are normally far apart. The formation of chromosome rearrangements is unique to cancer cells and is observed across all forms of cancer. “This is our Achilles’ heel, right there,” said Dr. Ljungman, Professor of Radiation Oncology and co-director of the Center for RNA Biomedicine, “and we could use CRISPR to specifically target these chromosome rearrangement junctions and cut tumor DNA strands similarly to what is done with radiation therapy, but without affecting normal cells.”

Dr. Ljungman and his team are using a modified version of CRISPR that requires two guide RNAs, instead of the usual one, and two dCas9 complexes. The cutting of the DNA to kill the cancer cell is then left to an endonuclease that is added to the machinery but needs to homodimerize in order to become active. By designing a pair of guide RNAs to specifically bind to both sides of a chromosome rearrangement junction in the cancer cell, the CRISPR machinery can be brought in and activated at the site of the to-be-cut location on the DNA. Dr. Ljungman and his research team, which includes Dr. Huibin Yang, Radhika Suhas Hulbatte, Natalie Gratsch and Lauren Hertzel, have generated proof-of-concept for this approach in multiple cancer cell lines both in cell culture and in vivo.

Cancer “Mars shot”
Dr. Ljungman formulated his idea in 2016, at the time when the National Cancer Institute launched the Cancer Moonshot initiative, with Congress authorizing $1.8 billion in research funding over seven years. During a weekly lab meeting, Ljungman presented his ideas and joked that “this project is shooting for Mars!” He named the approach Precision KLIPP Therapy —“KLIPP” means either “cut” or “opportunity” in Swedish— and hired Dr. Huibin Yang to head up the project. It took two years to design all the CRISPR reagents needed and to create cancer cell lines that could turn on these reagents at will to study the effects on the cancer cells. “The day when Huibin showed me the images of two bright dots in the nucleus of the targeted cells was exhilarating! After two long years of dedicated hard work, we had our answer—we got our CRISPR machine to cut the DNA of the cancer cell!”

That tumors harbor hundreds of chromosome rearrangements in their genomes has been known for over a hundred years. Yet, no cancer-directed therapy has so far attempted to exploit this common hallmark of cancer cells. “We are now entering a very exciting period where genome sequencing and CRISPR technology make it possible to identify and precisely target these cancer-specific rearrangements,” Dr. Ljungman explained. “Furthermore, rapid advances in the development of delivery systems, such as lipid nanoparticles used to deliver mRNA for COVID vaccinations, opens the door for future clinical applications for Precision KLIPP Therapy.”

Dr. Ljungman and his team started the testing of their technique on colon cancer cells. Encouraged by their early successful results, they then turned to bladder cancer and partnered with Dr. Phillip Palmbos, Assistant Professor of Internal Medicine, who is a clinician-scientist specializing in bladder cancer. “Localized bladder cancer is a major clinical problem. As an initial test site for Precision KLIPP Therapy, the bladder confers a great advantage for delivery in that the CRISPR reagents can be instilled at high concentration directly into the bladder without the risk of systemic exposure. This is important in the early testing of this approach since unwanted side effects of the CRISPR reagents in other organs have not been ruled out,” Dr. Palmbos explained. The recent publication in The New England Journal of Medicine11 of the first systemic in-human treatment with CRISPR to specifically knock out a disease-causing gene in the liver of patients showed that it is a safe therapy. It opens the door for many more genome editing treatments involving CRISPR. “This study is very encouraging and represents a watershed moment for the CRISPR field and its clinical applications,” added Dr. Ljungman.

The KLIPP team has generated CRISPR mRNA in large quantities in vitro that will be used for these studies, and they have shown that the CRISPR complex can be expressed in the nucleus of the cancer cells grown in culture. They are now taking the next step to target tumors in vivo. The Ljungman group has teamed up with Dr. Anna Schwendeman, Professor of Pharmaceutical Sciences, who has extensive expertise in nanoparticle development both from her time in industry as well as at the University of Michigan. Dr. Schwendeman and her team are currently developing lipid nanoparticle delivery systems for the Precision KLIPP Therapy that will be used in pre-clinical testing for bladder cancer. “With the success of lipid nanoparticle delivery of mRNA vaccines against COVID-19, there is tremendous interest in using these techniques for delivery of CRISPR mRNA for the treatment of a whole range of diseases,” Dr. Schwendeman said.

Precision KLIPP Therapy is directed to attack structural targets in chromosomes that are common and unique to cancer cells. “Our approach always targets chromosome rearrangement junctions, regardless of the type of cancer. Therefore, our treatment could be considered as a ‘universal targeting treatment,’” Dr. Ljungman added.Tumor heterogeneity is a major obstacle for most cancer therapeutics because of the emergence of resistant clones. Here, as well, Dr. Ljungman thinks that there are ways for Precision KLIPP Therapy to get around treatment resistance. “Chromosome rearrangements occur early in tumorigenesis and will be common in most clones that grow out and should therefore be targetable. However, when resistant clones grow out, we will biopsy them and whole genome sequencing would allow for the identification of new chromosome rearrangement junctions that can be targeted. In this way, there is always hope for the patient even if the tumor comes back.”

“In this way, there is always hope for the patient even if the tumor comes back.”—Mats Ljungman, Ph.D.


To keep this project moving forward, Dr. Ljungman has written 30 grant applications during the last three years and has been fortunate to obtain internal pilot funding from M-Cubed, KickStart and MTRAC. However, this funding only covers part of what is needed for the project. “With new and risky projects, the burden of proof is on the investigator and the reviewers should be critical. I have learned a lot from the reviewer’s comments and suggestions,” Dr. Ljungman acknowledged. The KLIPP team received some great news on a recent R21 application to NCI for the development of the Precision KLIPP Therapy for bladder cancer and this support should allow to further investigate this therapeutic approach.

While bladder cancer is the initial focus for Dr. Ljungman and his team, they have also partnered with other oncologists: Dr. Karen McLean, Associate Professor of Obstetrics and Gynecology, to target ovarian cancer, Drs. Maria Castro and Pedro Lowenstein, Professors of Neurosurgery, to target glioblastoma, and Dr. Erika Newman, Associate Professor of Pediatric Surgery, to treat pediatric neuroblastoma. In addition, collaborations with Dr. Joerg Lahann, Professor of Chemical Engineering, and Dr. Nils Walter, Professor of Chemistry, are ongoing for the development of novel nanoparticle delivery systems and for single molecule microscopy studies, respectively. “The University of Michigan offers great opportunities to collaborate from bench to bedside and I am very fortunate to be able to work with these talented and dedicated colleagues,” Dr. Ljungman said.

The KLIPP team is currently working on their first manuscript describing proof-of-concept for the Precision KLIPP Therapy approach. They have filed a patent for the technology with the University of Michigan Tech Transfer Office.