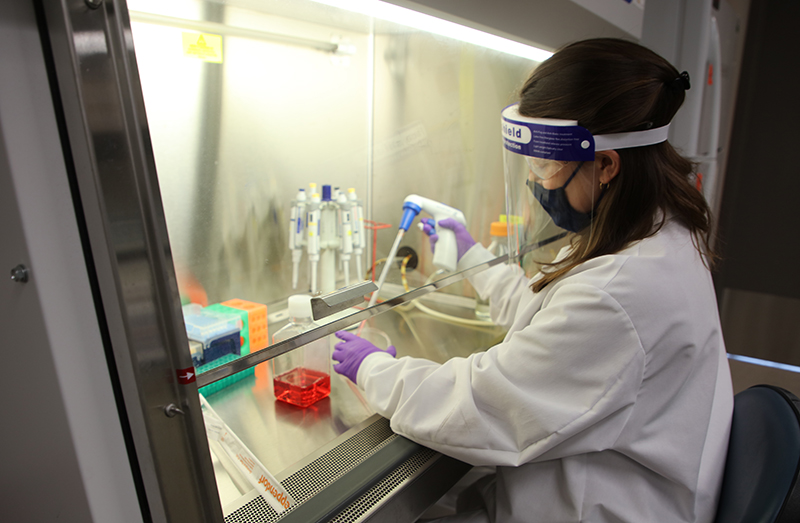 Sometimes it takes exploration outside our usual interests to find our true passion. This is what happened to Sydney Rosenblum, now a graduate student in Rackham Graduate School Program in Chemical Biology, in Professor Amanda Garner’s lab. In high school, Sydney felt that “science was not for her,” somewhat irrelevant or too abstract, until she serendipitously took a biotechnology class offered through a special program sponsored by the State of California. Obscure science became hands-on, and she was hooked. “It was really cool to actually be able to manipulate biology in the lab,” she fondly recalls. “It was also very exciting to learn about new pivotal discoveries, like DNA sequencing, things that you usually learn about only until much later.”

This advanced class offered a mix of foundational theory and lab experience with an internship in a small biotech company focused on plant genetics. After this first exposure to science research and discovering like-minded people, Sydney had no doubt about what she wanted to do. She went on to get an undergraduate degree in biochemistry, with the understanding that she would pursue graduate studies and a doctorate that would eventually allow her to join a biotech company.

Now in Professor Garner’s lab, Sydney is developing a cellular platform to study RNA-protein interactions that play a role in cancerous tumor growth. Lin 28 is an RNA binding protein that can inhibit a family of microRNAs, let-7, which blocks the expression of certain genes that promote cancerous growth. Over the next few months, Sydney will be screening for small molecules that could block this RNA-protein interaction, with the goal of restoring normal processing of let-7 microRNAs and its tumor suppressor activity.[1]

In addition to her strong commitment to her scientific studies, Sydney is also quite dedicated to bringing women and diversity into science, and to build a more inclusive society. “It’s really important to make scientists into three-dimensional people,” she said. “A lot of the times, you do only science, but in order to be a good member of society, you have to put in the work in other areas to make the scientific world a better place.” Sydney is the executive director of a student organization, University of Michigan Young Science Innovators (U-MYScI), that provides hands-on science experiences to lower income middle school students. In 2018 and 2019, they organized in-person free science camps, and she looks forward to resuming these outreach meetings. “It’s so important to get to the students early before they start thinking ‘I’m not good at science, I’m not good at math,’ and shut down. It’s not that you need to be good at this, what you need is to be curious,” she added. “Our camps are designed to foster curiosity and share the fun of hands-on experiments.”

Why Michigan?
Looking for a graduate program, Sydney found at the University of Michigan (U-M) two of her deciding criteria. The first one was that the U-M Rackham Graduate School Program in Chemical Biology is one of the largest stand-alone programs in the US and offers great diversity in research opportunities.

The second one relates to her personal values as a woman in STEM. She noticed that the faculty in this program is about 30% female and she thought that she had better chances to find a woman mentor at U-M.

For Sydney, it is very important for women to uplift each other and break the gender stereotypes and discrimination that still exist. As an example, she related an incident where she was told that she doesn’t look like a scientist. “What does it even mean?” she wondered, thinking of the documentary “Picture a scientist.” “It feels like it shouldn’t be happening, and it really is,” she added. This attitude goes well beyond physical appearance as men can coopt women’s ideas who are ignored coming from a woman, she further explained. “Hopefully, with numbers, there will be less discrimination and inequality in that. Got to get more women and more diversity in STEM!”

Sydney comes from a family of college-educated women, starting with her great-grandmother who went back to school in the 1940s, and attended classes at Vassar College, the historically second degree-granting institution of higher education for women in the US. Sydney was given her precious handwritten notebook from a biochemistry class. Sydney’s grandmother also attended the University of Michigan.

Sydney received her undergraduate degree from Scripps College, a prestigious liberal arts women’s college in Southern California. There she worked in the lab of Professor Aaron Leconte and developed the skills to prepare for her graduate education at U-M.

Outside of science, Sydney loves hiking and sewing quilts following her own inspiration. “It’s helpful during the dark cold nights of Michigan winter,” she smiled.