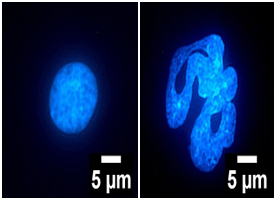 Their results, published in Nature Communications, show hope that microRNAs could be used as biomarkers for tumor development. If a miRNA regulates several significant pathways involved in ovarian cancer, it could make a great biomarker to detect early stages of ovarian cancers as well as a therapeutic target to treat recurrent disease. Currently, because the symptoms are vague, 85% of ovarian cancers are detected at stage 3 and 4 while early detection is essential to cure success.

Dr. DiFeo’s lab found that enhanced expression of miR-181a in fallopian tube secretory cells- the precursor cell type for the majority of high-grade serous ovarian cancers- leads to high-degree of genomic instability, abnormal nuclear structure and robust nuclear rupture resulting in a persistence of genomic material in the cytoplasm. While normally this persistence of genomic material in the cytoplasm induces interferon response through a protein called stimulator-of-interferon-genes (STING) to drive cell death, miR-181a directly downregulates STING and prevents apoptosis.

Several pharmaceutical companies are currently trying to use this property of STING to kill cancer cells. But Dr. DiFeo and her team show that if cells over express miR-181a, these drugs are not effective given that miR-181a is directly suppressing STING. The hope is that if miR-181a can be inhibited, then the immunotherapy drug would work more effectively.

Another question addressed by Dr. DiFeo team’s research was to find out if miR-181a is also amplified in other forms of cancer. These scientists studied over 30,000 tumors in a pan analysis that represented 20 different cancers. The results of this study show that indeed patients that had amplification of this microRNA did significantly worse. This finding has been also confirmed in other publications.

In addition to lung, breast and prostate cancers, miR-181a has been shown to be present in lupus, and other autoimmune diseases. It is probably because in normal cells, miR-181a regulates T-cell and B-cell differentiation. “A lot of work has been done on this miRNA in normal cells, showing its role in regulating immunity. No one has ever looked at its role in the immune response in the context of cancer.”

DiFeo’s lab also recently generated a miR-181a transgenic mouse so scientists can mimic what is happening in a patient, in a mouse. They are collaborating with Kathleen Cho, M.D., U-M Department of Pathology, Michigan Medicine, who models ovarian cancer in mice. Together they produce miR-181a using the promoter that is only expressed in the fallopian tube, to see if it leads to ovarian cancer.

“Our next step will be to find compounds that target this miRNA and better understand how this miRNA is regulated to discover novel strategies to target it. My lab’s work is always trying to bring the research back to the patients and to develop therapies,” adds DiFeo. Her lab is currently working with U-M’s drug discovery cores on this topic.

Analisa DiFeo is Associate Professor of Pathology and of Obstetrics and Gynecology at Michigan Medicine, and is a Member of the University of Michigan Center for RNA Biomedicine.