Neurons result from a highly complex and unique series of cell divisions. For example, in fruit flies, the process starts with stem cells that divide into mother cells (progenitor cells), that then divide into precursor cells that eventually become neurons.

A team of the University of Michigan (U-M), spearheaded by Nigel Michki, a graduate student, and Associate Professor Dawen Cai in the department of Cell and Developmental Biology in the Medical School and in Biophysics in the College of LS&A, identified many genes that are important in fruit flies’ neuron development, and that had never been described before in that context. 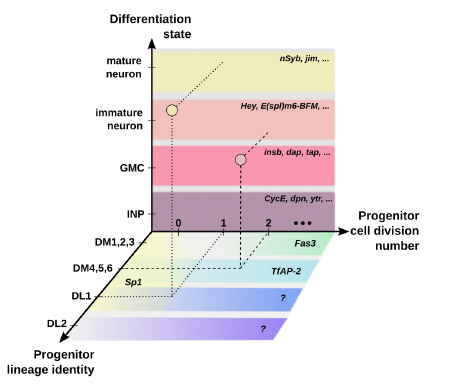 Figure to the left: Neurons in the fruit fly brain are made by passing through various differentiation states, and are segregated into unique subtypes based on the age and cell division number of their mother cell (progenitor). The complexity of this process is modelled in the diagram above. Different RNAs play a role in these neuron formation steps. This study identifies many RNAs that were not previously known to be involved in these processes, and helps us better understand how this complex neuron-generation process works at the molecular level.

Since many genes are conserved across species such as between fruit flies (Drosophila), mice, and humans, what is learnt in flies can also serve as a model to better understand other species, including humans. “Now that we know which genes are involved in this form of neurogenesis in flies, we can look for them in other species and test for them. We work on a multitude of organisms at U-M and we’ve the potential to interrogate across organisms,” explains Michki. “In my opinion, the work we did is one of the many pieces that will inform other work that will inform disease,” adds Michki. “This is why we do foundational research like this one.”

Flies are also commonly used in many different types of research that might benefit from having a more comprehensive list of the fly genes with their associated roles in neuron cell development.

The discovery
Neurons are made from stem cells that massively multiply before becoming neurons. In the human brain, the process is extremely complex, involving billions of cells. In the fly brain, the process is much simpler, with around 200 stem cells for the entire brain. The smaller scale allows for a fine analysis of the neuronal cell division process from start to finish.

In flies, when the stem cell divides, it yields another stem cell and a progenitor cell. When this last one divides, it makes a so-called precursor cell that divides only once and gives rise to two neurons. Genes control this production process by telling the cells either to divide —and which particular type of cell to produce— or to stop dividing.

In particular, at the progenitors’ stage, the scientists identified three genes that are important at this stage for defining what ‘kind’ of neuron each progenitor will make; these particular genes had never been described before in this context. They also validated previously known marker genes that are known to regulate the cell reproduction process.

When they applied their analysis technique to the other phases of the neuron development process, they also recorded the expression of additional genes. However, it is still unknown why these genes go up in expression at different steps of the neuron development process and what role they actually play in these different steps. “Now that many candidate genes are identified, we are investigating the roles they play in the neuron maturation and fate determination process,” says Cai. “We are also excited to explore other developmental timepoints to illustrate the dynamic changes of the molecular landscape in the fly brain.”

“This work provides rich information on how to program stem cell progeny into distinct neuron types as well as how to trans-differentiate non-neuronal cell types into neurons. These findings will have significant impact on the understanding of the normal brain development as well as on neuron regeneration medicine,” adds Cheng-Yu Lee, a Professor from the U-M Life Sciences Institute who collaborated with the Cai Lab.

The techniques
This study is mostly based on high-throughput single-cell RNA-sequencing techniques. The scientists took single cells from fruit flies’ brains and sequenced the RNA, generating hundreds of gigabytes of data in only one day. From the RNA sequences, they could determine the developmental stage of each neuron. “We now have a very good understanding of how this process goes at the RNA level,” says Michki.

The team also used traditional microscope observations to localize where these different RNAs are being expressed in the brain. “Combining in silico analysis and in situ exploration not only validates the quality of our sequencing results, but also restores the spatial and temporal relationship of the candidate genes, which is lost in the single cell dissociation process,” says Cai. 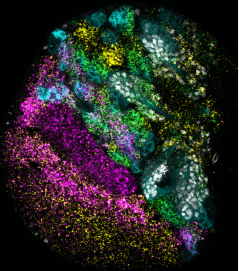 Photo on the left: A microscope image of one of the developing fruit fly brain lobes, stained for our cells of interest (white), and 4 different RNAs: mamo (yellow), bi (magenta), data (green), and a long non-coding RNA, cherub (cyan).

At the beginning of their study, the scientists analyzed the large data set with open-source software. Later, they developed a portal (MiCV) that eases the use of existing computer services and allows to test for repeatability. This portal can be utilized for cell and gene data analysis from a variety of organs and does not require computer programming experience. “Tools like MiCV can be very powerful for researchers who are doing this type of research for the first time and who want to quickly generate new hypotheses from their data,” says Michki. “It saves a lot of time for data analysis, as well as expenses on consultant fees. The ultimate goal is to allow scientists to focus more on their research rather than on sometimes daunting data analysis tools.” The MiCV tool is currently being commercialized.

The collaborators of this study are from the Dawen Cai lab at the University of Michigan Medical School as well as Dr. Cheng-Yu Lee, from the U-M Life Sciences Institute. The Cai lab is a member of the U-M Center for RNA Biomedicine. The team used two U-M core facilities, the Flow Cytometry Core and the Advanced Genomics Core. This work is supported by funding from the University of Michigan, including the MCubed program, Department of Cell and Developmental Biology’s IDEA Awards in Stem Cell Biology, and the MTRAC program.