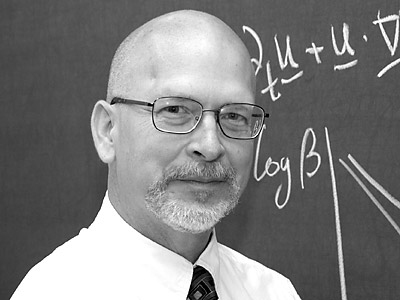 With great sadness we join the entire University of Michigan community in mourning Charles R. Doering, Ph.D., and expressing our deepest condolences to his colleagues, friends and loved ones.

Charles (Charlie) Doering was the Nicholas D. Kazarinoff Collegiate Professor of Complex Systems, Mathematics and Physics and was the Director of the Center for the Study of Complex Systems. He was a member of the U-M Center for RNA Biomedicine Strategic Advisory Board.

One of the great, polymath minds that found simplicity in complexity, Charlie generously shared his passion for modeling complex systems such as single-cell and multi-cellular organisms, and for deriving rigorous predictions. We are very grateful for his insightful participation in the Center’s leadership and for his support of the RNA research community.

“Charlie was always supportive of our efforts to envision and create our own Center, which in many ways was modeled after his successful, also LSA-based Center,” says Nils Walter, co-Director of the Center for RNA Biomedicine. “I owe him a personal thanks for his kind invitation and introduction to my presentation on the recent Nobel Prize in Chemistry for CRISPR-based genome editing, which allowed us to celebrate one of the many recent scientific breakthroughs that RNA research has given us.”

Professor Doering’s research focused on the analysis of mathematical models with the aim of extracting reliable, rigorous, and useful predictions. These models range from stochastic, dynamical systems arising in biology, chemistry, and physics, to systems of nonlinear partial differential equations such as those that (ostensibly) describe turbulent fluid flows. The techniques employed range from the development of exact solutions to the application of modern mathematical methods including rigorous estimation, careful numerical computations and simulations, and the use of abstract functional and probabilistic analysis —often a combination of all three approaches.

Professor Doering received a Bachelor’s degree in mathematics and physics from Antioch College, a Master’s in physics from the University of Cincinnati, and a Doctorate in mathematical physics from The University of Texas at Austin. He held positions at Los Alamos National Laboratory and Clarkson University prior to joining the Michigan faculty in 1996. Professor Doering is a Fellow of the American Physical Society and of the Society of Industrial & Applied Mathematics and, among other recognitions, received the NSF Presidential Young Investigator Award, the University of Michigan’s College of Literature, Science & the Arts Excellence in Education Award, a Fulbright Scholarship, and a Humboldt Research Award.  He was named a Simons Fellow in Theoretical Physics in 2014, a Guggenheim Fellow in Applied Mathematics in 2016, and a Simons Fellow in Mathematics in 2021.