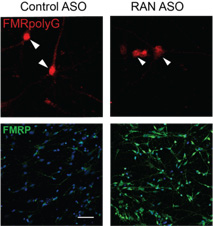 By focusing on the biology of healthy nerve cells, a team from the University of Michigan Department of Neurology found that repeats in the gene that causes Fragile X Syndrome normally regulate how and when proteins are made in neurons. This process may be important for learning and memory in these nerve cells and potentially in people.

“The repeats function like a switch, slowing down protein production and then quickly turning things back on,” explains Peter Todd, MD., Ph.D., and Principal Investigator of this research.

The results suggest that we have simultaneously corrected two of the big problems that happen in Fragile X-associated disorders.
—Peter Todd, M.D, Ph.D.

Armed with this discovery about how the repeat functions normally, the team worked with Ionis Pharmaceuticals to develop an antisense oligonucleotide (ASO), a short strand of modified DNA that can specifically target the transcripts of a defective gene to correct an abnormality. Ionis’ ASOs are designed to bind precisely with RNA, halting the process of creating a disease-causing protein which could block translation of expanded Fragile X repeats that are toxic to neurons and cause human disease. This ASO has produced two remarkable results. First, the ASO decreased the toxicity that these repeats caused in rodent and human neurons. Second, this blockade of repeat translation triggered a big increase in the Fragile X protein, whose loss causes Fragile X syndrome. “The results suggest that we have simultaneously corrected two of the big problems that happen in Fragile X-associated disorders,” says Todd.

To develop a new treatment strategy, we really needed to understand the native biology of how these repeats work and why they are there in the first place.
—Peter Todd, M.D, Ph.D.

This research offers a novel pathway forward to treatments in this class of neurological diseases. “To develop a new treatment strategy, we really needed to understand the native biology of how these repeats work and why they are there in the first place,” says Todd.  “The study was done in dishes, and so there is still a long way before it can be tried in patients, but advancing our understanding of normal nerve cell biology is a crucial step to find cures.” 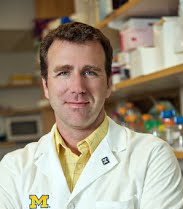 These results were published in Nature Neuroscience, on February 17, 2020. Caitlin Rodriguez, Ph.D., spearheaded this research during her Ph.D. work at the University of Michigan. Shannon Wright, a neuroscience Ph.D. Candidate, expanded the lab’s ability to use stem cells which allowed for testing of these ideas in human neurons from patients with Fragile X-associated disorders. Dr. Todd and his group partnered with multiple other labs in the U-M Department of Neurology as well as Ionis Pharmaceuticals, who provided essential reagents and guidance for these experiments. “It was a major effort for our lab,” acknowledges Todd, “but the results are very rewarding. None of this could have been done without these collaborations and support from the U-M Medical School, the U-M Center for RNA Biomedicine, philanthropic donors, and our partnership with Ionis Pharmaceuticals. It was a high-risk research project that resulted in high rewards.”