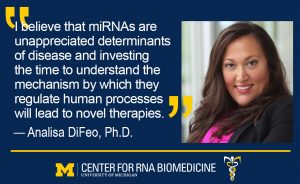 Abstract: High grade serous carcinoma (HGSC) the most common type of “ovarian” cancer is one of the deadliest cancers diagnosed in women. One of the primary drivers for the high mortality rate associated with HGSC is tumor recurrence and chemoresistance. Thus, there is a critical need to identify the genetic drivers of tumor development and recurrence to improve therapeutic strategies. In this proposal, we provide extensive evidence for the clinical and biological importance of miR-181a, which is amplified in a large majority of HGSC patients, correlates with poor overall survival, and induces epithelial to mesenchymal transition (EMT), metastasis, drug resistance, and stem-like cell properties. Remarkably, this correlation between miR-181a with clinical outcome and recurrence has also been shown in numerous other cancers. Notably, miR-181a expression in HGSC tumors offered stronger prognostic value than established clinical biomarkers. Furthermore, analysis of >10,000 tumors representing 20 different cancers revealed that amplification of miR-181a correlated with poor outcome. Most recently, we have uncovered a novel mechanism through which miR-181a can drive tumor development at the earliest stage through the cooperative targeting of RB1 and Stimulator of Interferon Genes (STING). Enhanced miR-181a promoted the growth of highly aggressive and genomically instable cells through the direct inhibition of STING, a key activator of interferon signaling in response to cytoplasmic DNA. Though activating anti-tumor immunity is increasingly being recognized as an important therapy in cancer treatment the efficacy of current immunotherapies for the treatment of HGSC has not been successful mainly due to the highly immunosuppressive microenvironment. One of the primary means by which a tumor creates an immunosuppressive microenvironment is by inhibiting STING signaling within the tumor. Thus, our novel finding showing that miR-181a directly regulates STING introduced unique opportunity to assess whether therapeutic targeting of the miR-181a will reactivate IFN signaling via STING to overcome immune tolerance that is commonly seen in HGSC tumors. 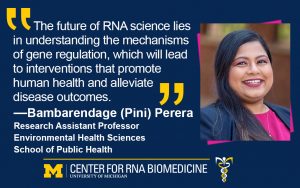 Abstract: Piwi-interacting RNAs (piRNAs) are small non-coding RNAs that associate with PIWI proteins to induce DNA methylation for retrotransposon suppression. Mature germline piRNAs typically consist of 24–32 nucleotides with a strong preference for a 5ʹ uridine, an adenine at position 10, and a 2ʹ-O-methylated 3ʹ end. In the current study, we identified piRNAs and associated machinery from mouse somatic tissues by quantifying Piwil1, Piwil2, and Piwil4 expression in brain, liver, kidney, and heart. The study revealed 26 piRNA sequence species and 40 piRNA locations exclusive to all examined somatic tissues. Non-coding RNA expression is sensitive to environmental exposures, although it has been unclear whether exposures such as lead (Pb) impact piRNA expression. In the current study, mouse dams were exposed to Pb 2 weeks prior to mating which continued through offspring weaning. We profiled tissue- and sex-specific effects of perinatal Pb exposure on the piRNA transcriptomes of the resulting progeny at 5 months. Based on significant p-values (<0.05), 346 piRNAs were differentially expressed among Pb-exposed mice in testes, 339 in ovaries, 127 in M cortex, 105 in F cortex, 42 in M liver, and 59 in F liver. According to preliminary results, a total of 3 piRNAs were
differentially expressed based on FDR(q<0.05). Although piRNA expression has long been considered exclusive to the germline, our results support previous reports of somatic piRNA expression, and demonstrate that perinatal environmental exposures such as Pb influence longitudinal piRNA expression in a tissue- and sex-specific manner.